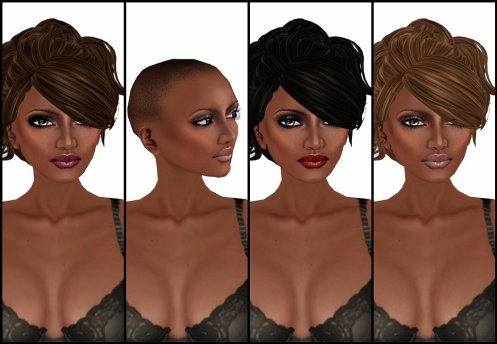 It’s taken quite some time in between RL work and some projects that went ahead of it, but as of today, Kim in in the shop at PXL Creations. I think it’s Hart’s best skin ever… logically so, maybe because it’s an ongoing work of development, and he strives to grow with every skin he makes. But yes, again, I’m very happy with the result. One of the masive improvements in this skin is the way he handled the eyebrows. They have always been hand drawn, but a lot of people thought it was a weaker feature in the skin. So Hart’s been studying eyebrows in RL and Kim’s brows really look good IMHO. The pale Kim has a red head version, but it didn’t feel good to use it in the darker skintones, so that is a bonus for the fair skinned among you. And the tan  has a light brown hair version instead of the blonde.

Also new is the pricing. I’m excited about it! We’ve had some massive discussions about prices over the last couple of months,  but I’m so pleased to let you know that all female skins at PXL creations as of now are priced L$ 1000 per single skin (well, single skin… not really… single make up, but still all the eyebrow options and the hair and bald version) and that there are great deals on the fat packs as well.

Also, Sasy needs to show Hart some good lovin’ because finally he’s decided to make his skins shaved and offers various pubes on the underpants layer! She (and many others… so go smother the guy) has been asking for that for ages now!!

This skin was first developed in tan. We were looking for a way to achieve a higher contrast skin than what PXL did so far, but without making her look like she’s been in the tanning studio too much… you know… that orange tan that a lot of tanning studio afficionadas have. So the idea was to work from the tan Kim and then gradually go lighter, and correcting shading and highlights on every skin tone as she went paler, to maintain that very contrast we were aiming for.  And then the process started again, which I’ve shared with you guys before… beta v1.2 up to, I think,  6.7. Meticulously balancing the adding of a pixel or two here… and then upping some contrast there or adding some shading on the calves… aaah, I think you get my point. There has been put a lot of work again in this beauty. I would have loved posting a photo of various beta’s next to eachother… but the differences from beta to beta are not really visible on the photo’s. You’ll agree with me that the end result is stunning, though.  Nude pics after the cut!!

And then, some 3 weeks ago Hart sent me the full set of  tan skins for the last check up… but before I could log on and open them, he als left me an offline saying that he started to redo the highlights again, and that I might as well trash those skins, as they weren’t final after all. So yeah, if you own previous PXL skins, it’s really worth putting some of them next to eachother and see how much they have evolved over time.  As you can see, there is quite a progress in depth and definition between Kim and Efe/Grace who shared pretty much the same body, and the difference with Linda, which at the time of her release I found so defined and pretty already (from left to right: Kim, Efe, Grace & Linda)

NB: I have been involved in the development of Kim as a friend of Hart. If you think that makes me less qualified to write about Kim, feel free to surf away from this page.