It’s been a while since Ivy Graves started the work on her sim and her new skins, and the result of both is lovely. These skins have a fragile facial beauty and come in 4 skintones, and a plethora of make ups, from very natural to ultra dramatic. I picked up 3 of the 4 skintones and to the upper left you can see a skin with different eyebrows, Ivy sent that one to her group 2 weeks ago, and obviously there have been some change between than moment and the day of final release. Whereas I like the subtle look of the (non mod) eyebrows, I am a huge fan of adjustability, or, if one chooses to make a skin non mod, the availability of more hair colour options to chose from. The mouth of this skin won me over, it’s so pretty. 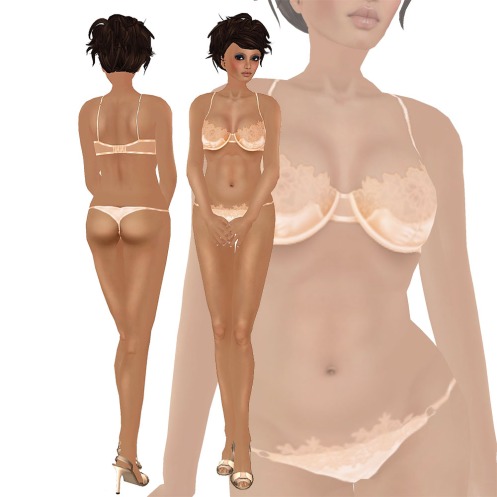 The body is smooth and although some might say it lacks detail, I prefer saying it has shading by hinting. The stomach is very soft, with a mere impression of muscularity, and I like the back of this skin and the subtle highlighting on the legs. The body work reminds me a lot of Minnu’s first skin (except for the seams which in her first skin were quite an issue for me).  On second thought I do have an issue with the collarbone… it just looks a little odd to me, but the face makes up for it. For me that is.