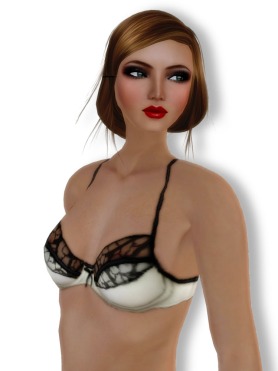 Aden is one of those skin designers that I have been following for a while, and although I did find the skins interesting before, they never really worked for me. They have a frail beauty which I adore seeing on others, but somehow when I put them on it  always felt out of place. That has definitely changed with the release of Gen4.

So, am I about to start pooping rainbows now? Nope, because I do think there are some issues to this skin. Does that change that I like it a lot? Nope… not one single bit or I would not have bought multiples… so read on…

The skins come in 6  skintones, of which I’m showing 3 in this blog post. The fairest, the light tan and dark tan. I like the tones being not overly saturated. Like many skins, not only Adens, they have a couple of minor flaws… there is a visible texture difference from the head to the neck. Apparently a smooth transition is very hard to tackle. Also, for a skin that looks quite drawn, the ears look très photo, although colourwise they do blend in quite nicely with the rest of the head. Lips and eyebrows are the strong points for me in this skin, but it would be nice for the avid blondines to have some lighter eyebrows available as well. On the plus side, Aden does pack several brow shapes with the skins. I’m wearing the flat brows here, which are the most face neutral.

On the body there are again 2 things that immediately caught my eye. The pelvic zone, which looks a bit too masculine for my taste, but, with the defined loins is absolutely catching one’s attention and second eye catcher are the breasts, which I think are really pretty. I admire the shading of the breast muscle that Aden did and which shows nicely on the portrait photo above, which is post processed, unlike the rest of the photos in this post. I saw it on a mutual friend before the skin came out, and to be honest, that breast made me buy the first skin in this series.

I like the body being smooth, without the glow that apparently is the new black in skin land. There really is a difference between hydrated skin and an oily look in RL and SL alike. The first being quite an art to achieve, the latter tends to make a skin look cheap. Anyway, I’m rambling. I do like the over all look of Aden’s gen 4 and I’m actually surprised that I haven’t seen it blogged more on the feeds.