I honestly think I have been the first to blog about Nef and Ivalde, Embla and Ask, her three initial brands which later were all integrated under the Ivalde label. I don’t even remember how we met, I think it must have been while I was exploring the grid. I was a rookie blogger, and Nef a rookie designer. It was the beginning of  a nice friendship. Even though lately, we haven’t been in touch much. I hope she’ll be back soon, but I know she’s been suffering pains while designing, and I have suggested she’d take a break a long time ago, so I’m actually glad to see that the move is pretty much making her take the break she really needed. So I figured, in this post to take you through my blogging history with Neferia… don’t be shocked… some of the photo’s are pretty bad… I had a good laugh myself. 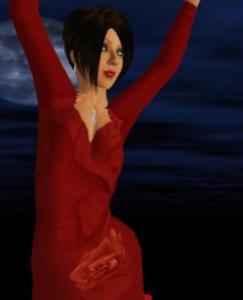 Yes, that was back in December 2006, wearing Amy, from the Embla brand. I started blogging at Second Style just a few days before meeting Neferia.

A few months later… more Ivalde. Logically so, because Neferia turned out to be one of the most diligent and dedicated designers on the grid, and her skills were improving fast, so blogging her again was really a pleasure.

After that, RL took over and there was so much to write about, people knew how to find me and I got a lot of blog requests and so little time. I did a few quick posts about Ivalde, and I also remember Celeb doing a couple. And then, almost a year after my first blog, I remember Nef IM-ing me, asking if I had forgotten about her, or that something was wrong. Nooooooo! not at all.. everything was really very right… but I had been so swamped that I just didn’t manage to be in touch. So I made time to visit my old friend, and got surprised all over at the quality and the improvements in the designs that had been made once again. Result… another Ivalde post *smiles*

And then I went on hiatus from Second Style, was busy with a few other projects and eventually started up my own blog. I’ve been using Ivalde clothes on several looks but early March of this year, my eyes caught the beautiful Odile gown in Ivalde which I wanted to make pretty photos with.

And so today, it’s time for a Look of Ivalde day. I’ve picked the stunningly beautiful blue Halldora gown and wear it with the Birla belt in violetred. The Ivory Spring flower Bun is from JE Republic (retextured and recoloured the flowers) and I’m wearing Tuli’s Hope fair/Tequila. My Veronique jewelry is from Shiny Things.

Nef… enjoy your hiatus… get well, and come back when you’re ready <3

0 thoughts on “Look of Ivalde”