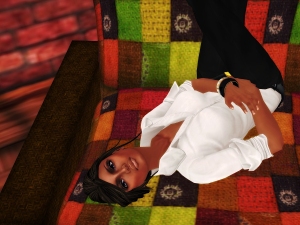 I heard about the BBBC 2009 on plurk…and decided to join. More info about it you’ll find here, on Alicia Chenaux’blog. I have decided to go with the suggested topic for the first post in this challenge: How long have you been a blogger? How has it enriched your life?

Well, it was late November 2006 that I read message from Celebrity Trollop on Second Style that she was looking for new writers for the blog. I was pretty new to SL then, but fascinated with the various aspects of fashion in this virtual environment. So I sent her a message, and on December 1, 2006 I shared my first post with the readers of Second Style Fashionista. Uncertain at first, not able to even create a simple t-shirt, why would I dare to write reviews on SL fashion? English is not my native language… would it be good enough to write in? But in RL I have worked with my father, who was in the fashion industry before retiring last year, and I’ve been visiting the major fashion fairs in Europe ever since I was 16 years old. I’ve never had the ambition to follow in his footsteps, but we share a fashion for design and quality clothing. I decided that was justification enough to take my first steps in SL fashion blogging. And as far as my English is concerned… well… I think I’m doing fine.. and nowadays there are so many non native speaker bloggers anyway.

I was an avid reader of the few blogs that the fashion scene had back then. PXP, Linden Lifestyles and Second Style being the big ones, and at first it felt just plain good to be a part of the community of witty, quirky people who back then put a pretty heavy stamp on what was hot and not in SL. But what blogging has really brought me (aside from a huge inventory) are some pretty awesome and genuine friends. People like Roslin Petion, Sachi Vixen and Shai Delacroix I’ve come to care for as if they were my friends living across the street. Catero and Ryan, my former “colleagues” from Second Man, they are dear to me beyond SL. And then there are people who I got to know when they just started out designing in SL, like Lucas Lameth, my style guru and perfect companion on many a shopping spree, Dakota Buck, that wonderful, sweet, opinionated kick ass textures girl who just started a whole new designing chapter with her best friend Twiggy Whippet and Truth… eternal and extremely talented badass stinker.. one of my dearest buddies, who has never let me down. I love them all. And of course Samara Barzane….. one of the sweetest and most genuine people around… my SL sister, even if I don’t believe in SL family ties. She’s the exeption to the rule.
You know… one of the things I hate about the Academy Awards are the eternal speeches full of credits… but really.. in this case I don’t know where to stop. Blogging has been a way for me to make new friends, something which in RL, due to my extreme shyness isn’t always easy for me, and even if I haven’t mentioned you by name here… you know who you are <3